Newly released and in Cornwall you will find two self guided tours. The first looks at local astronomy hero John Couch Adams and takes you on a self guided trip around his home area based in Laneast and Launceston. There is lots of information about the man and his achievements and sites to be seen along the way.

The second leaflet is a tour of the Hurlers. Once again self guided, it takes you around the immediate sites. It looks at the recent archaeoastronomy developments for the sites.

These leaflets have been produced as part of a Heritage Lottery funded project by Bright Stars Dark Skies. Grab one while they last!! 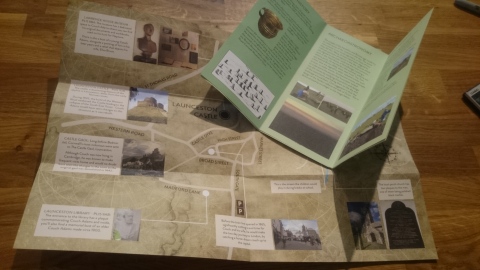 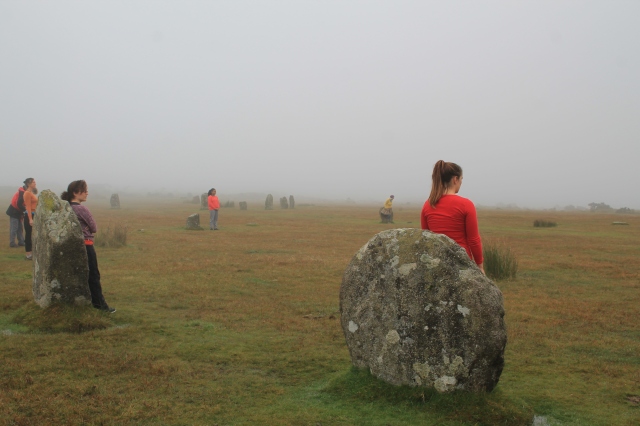 Equinox brought experiments, fun and antics. Sunday was spent at The Hurlers on Bodmin Moor. We were there to celebrate the equinox weekend and the project Dark Skies Bright Stars – organised by Mayes creative. On arrival the site was shrouded with mist which added to the whole atmospherics of the event. At 2pm the event started with dancing and singing in the stones, it was wonderful to see the site used in such a creative way. The dancers were very expressive using the whole of the central circle. A choir accompanied the moves with melody, lyrics and tuneful notes. Once the mood had been set the crowd were invited to participate in an experiment. This experiment was to test the resonance of the stones. The stones themselves have flat sides and could have been used to reflect sound back to groups of people singing or making noise within them. Sound testing equipment was set up and a number of tests were undertaken. First of all the crowd was asked to line up with the stones and the sound test equipment was placed in the center of the circle. A number of notes were sung straight and in  staccato. Then the crowd were asked to clap together and then one at a time. Amazingly an echo could be heard with the claps and the sound testing equipment picked up a resonance. With this early success we repeated the experiment but this time had the crowd stood in the center of the circle and the test equipment on the edge. This did not give us the same results, it in fact increased the resonance.

Bring on the drums!!

A number of drummers had been invited along to attend. It was time to check the resonance with a larger sound. The drums first of all stood with the stones and it was amazing to hear the noise echo and reverberate around the circle. But when a snare drum was brought into the circle the effect was very noticeable. The resonance of the snare drum was particularly effected when the drummer reached the center of the circle. This experiment was a huge success and shows what can be achieved by just trying out ideas and having a go!

Boskednan circle is located on a ridge near New Mill north of Penzance. Here is an image looking towards Carn Galver a local easily recognisable outcrop. The summer solstice sunset imaged falls to the south of this outcrop onto an area known as watch croft. But what is interesting is that a Lunar Major Northern setting point would be directly on the Carn itself, as it measures 318 degrees. Could this have been built as a lunar observatory? rather than a solar one? 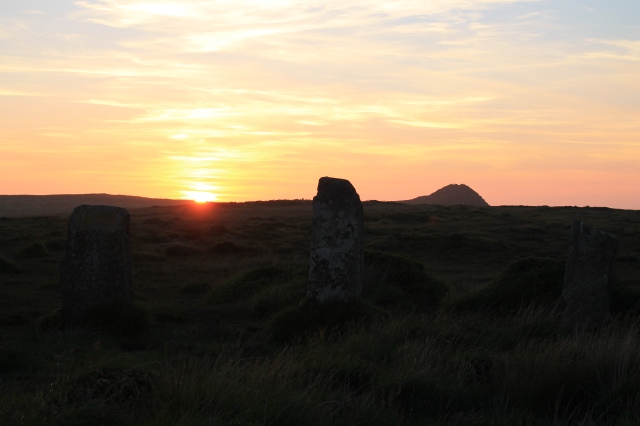 Other circles in the area have links to the lunar cycle, The Merry Maidens also has a local outcrop in the lunar major setting position and Boscawen-un has lunar links with its quartz stone and positioning of a menhir (standing stone) in the lunar northern rising position. All these discoveries and much more are being compiled and will be released in a book dedicated to wonderful circles found here in West Penwith, within the new year.  I will keep you all posted.