I was lucky enough to enjoy another clear summer solstice sunrise here in west Cornwall. This year I chose to go to Boskednan on the moors above Madron. This circle is a very special circle with a known setting alignment with Carn Galver at the lunar major standstill position. The summer solstice sun rises over the Zennor ridge, a location with a large number of barrows and a quoit. Here are some images from the morning. 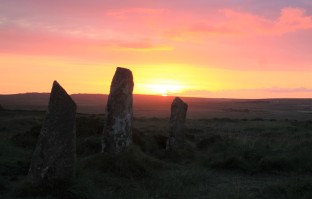 As we head up for the summer solstice, it is worth pointing out that one of the 15 Neolithic barrows at Carrowkeel, Sligo in Ireland has a lightbox which is aligned to illuminate the tomb at summer solstice sunset. This is found at barrow G, I have added some photos of the entrance to the tomb, (which is a tight fit), the blocking stone is covered in cup marks to the rear. A lightbox lets light into the chamber at certain times of the year. The most well-known example of this is found at Newgrange, Ireland, which illuminates a long corridor to the end chamber on the winter solstice sunrise. This lightbox would work in a similar way, it has also been suggested that the alignment could also work for the full moon nearest the mid-winter solstice.

There is so much to discover at Carrowkeel, it is well worth the climb to the top of the hill.  At tomb G at Carrowkeel, there is also a large basin stone to the right of the entrance which is covered in cup marks. It’s well worth the climb inside as there is a wonderful keystone in the roof, the interior shows what an amazing engineering job was made on building the tomb. A virtual tour of the tomb is available here and lets you look inside this tomb and at a number of other in the complex.

A few pictures of the Carrowkeel tombs and the lightbox with cup marks.