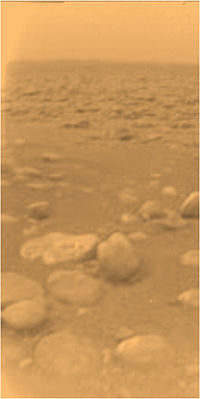 On this day 11 years ago a tiny probe named Huygens landed on Saturn’s moon Titan.  Sending back images of an Earth like but dry landscape.

The science collected by this audacious and tiny probe wasn’t the end of the story for Titan.  The Cassini – Huygens mission has gone through lots of discoveries since. Particularly that Titan isn’t as dry and barren as first envisioned.  Lakes at the North and South pole’s.  The lakes are made of liquid methane and imaged by the RADAR equipment on the Cassini satellite.

3 thoughts on “11 years since Huygens landed.”